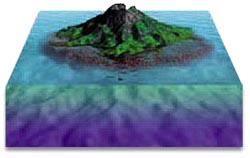 The diagram shows the life-cycle of a volcanic island. Write a 150-word report for a university lecturer describing the features in the diagram. 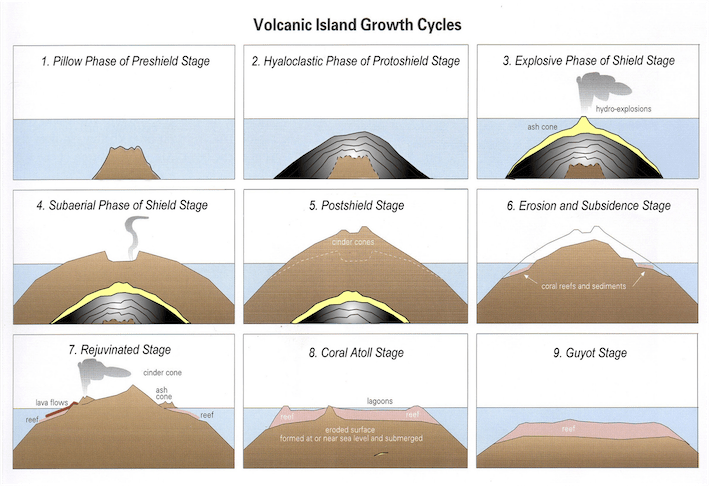 The diagram shows the several stages in the formation of a volcanic island and how it eventually becomes an underwater reef.

In the first two stages (‘pillow/preshield’ and ‘Hyaloclastic/protoshield’ stages) a mountain begins to form under the surface of the sea. Once the mountain starts peeking over the surface comes the ‘explosive’ phase hydro-explosions occur, layering the mountain with a cone of ash. Over time, this ash cone is covered by what appears to be sediment(Shield Stage), which is once again, over time covered by cinder cones(Postshield Stage).

This shield of cinder cones and sediment erodes over time, giving an opportunity for coral reefs to from. If the volcanic activity is rejuvenated, lava flows out into the sea, allowing for the formation of more coral reefs. If a volcanic eruption takes place, the top of the mountain becomes table-land which completely taken over by corals. This is the ‘coral atoll’ stage. Over time, the weight of the reef compresses the surface further down into the sea forming a fully underwater coral reef. This is called the Guyot stage.