There are some words that you will need to be proficient in to get a good score in all areas of the test. Here is a list of those words and how to use them. Be prepared for the first 20! These words are helpful across all exams - be it GRE, IELTS, PTE, TOEFL, OET, SAT, or any other English exam you wish to take. 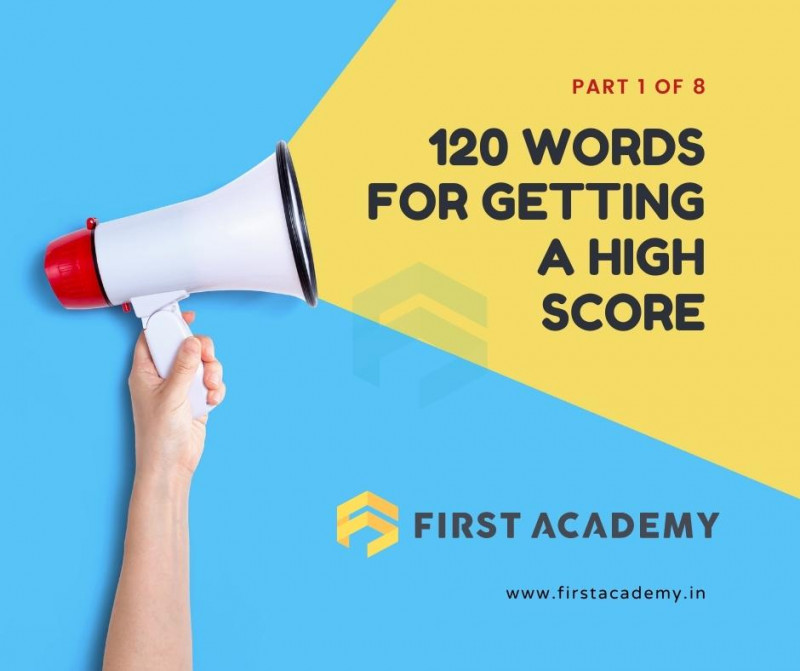 The full list of articles in the series can be found at the end of the word list.

To abolish is to get rid of or annul. In the U.S. it's associated with slavery. Those who opposed slavery were called "abolitionists."

Sentence: Some believe that abolishing the death penalty encourages crime.

Logical and clear. If someone speaks coherently, they are speaking clearly and in a way that is easy to understand.

Sentence: He had many questions. So sorted them into a coherent order.

Made up of or formed from.  The periodic table comprises 118 elements(❌not comprises of!). There are however some instances where you use of. Here are some examples that will allow you to understand the difference

Sentence: Listening comprises the first part of your exam.

Relating to family, home, or home country. Domestic work is work done in the home. Domestic animals are those adapted to domestic use or domestic life.

Sentence: The hotel room had a cozy domestic touch to it.

Sentence: Thanks to OTT platforms, domestic cinema has gone international

Being serious about something. Steady, sincere, and eager.

Sentence: The work on the project began in earnest.

Sentence: He talked about the job with an earnest expression on his young face.

Clear and including details. Explicit can also mean "offensive" or "graphic,". Movies and TV shows have warnings about "explicit language" or "explicit violence".

Sentence: The judge wanted more explicit information about the trials.

Sentence: The map gave explicit directions to the location of the treasure.

Delay or block progress or movement.

Sentence: Legal problems impeded the progress of the project.

Sentence: Her constant delays are impeding our success.

Something that occurs naturally and without needing thought. When you hit your toe against something, you instinctively yelp.

Sentence:  He instinctively pushed back hair that had fallen over his forehead.

Sentence: For most city dwellers, crossing a busy road is instinctive.

Nostalgic is when you miss your childhood, or the things that bring back memories that you cherish or are close to your heart. It is a longing or a desire for something familiar or comforting.

Sentence: The kitchen smelled of Indian spices. After having been in Europe for 10 years, it was a nostalgic smell.

Sentence: While watching a movie about school days,  nostalgic childhood memories played in my mind.

Prevail can describe different kinds of success. If you prevail upon someone, you have influence on them. The word indicates some contest or conflict.

Sentence: My desire to meet my girlfriend prevailed over my need to study for the exam.

Sentence: If you are watching and doing nothing, you are letting evil prevail.

Appropriate. Related to the matter at hand. Applicable. Pertinent.

Sentence: The police asked the public to contact them with any relevant information.

A word to describe moods, facial expressions, or situations that are dark, gloomy, or depressing or even dully coloured.

Sentence:  His face was somber, without a smile or a pleasant expression.

Sentence: After she lost the contract, she was in a somber mood .

Lacking movement. Not growing, changing. Without life or vitality. Not flowing or circulating.

Sentence: The house was old and unused. The air inside it was stagnant.

Sentence: When people are in a stagnant state, they cannot be creative.

Sentence: The crowd was in a turmoil now, shouting, and screaming.

Dedication or enthusiasm, eagerness or devotion. Being energised or motivated to do something.

Sentence: Though she was old, her zeal was unbending.

Sentence: He has a great zeal for hard-work.

The only contextual vocabulary app designed to teach vocabulary in ways you have never learnt before! Designed and developed by First Academy